OK, I know I was supposed to post the next blog entry on the evangelical disaster Friday night or Saturday. But I've decided to wait.

I have already written it, and it's ready to post. It's a very important article in the series. It will probably ruffle a few feathers and generate a few passionate comments. But since we're already into the weekend, and my blogtraffic is typically half or less on weekends, I've decided to wait till after the weekend to post it. (Which means I'll post it Tuesday, because Monday is Menagerie Day, reserved for more lighthearted issues.)

I hope you'll think it worth the wait when you read Tuesday's post. Please don't miss it.

Meanwhile, here are some odds and ends: 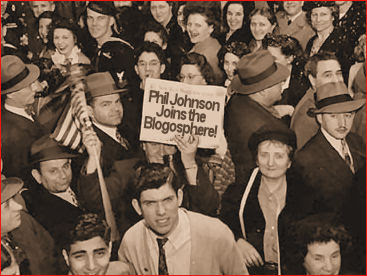 Just wanted to say thanks for blogrolling Intellectuelle--we like to entertain strangers :)

I'd reciprocate but we only link to other team blogs (sidebar clutter control), so when you convince John MacArthur to be your co-blogger, we'll add you to the roll ;)

(yes, we women bloggers are big on emoticons...as opposed to crunchy cons...but it's just me that makes bad puns--I don't bake well either)

Enjoying your fiery blog. And appreciating your efforts to keep it readable for us visually challenged geezers. The content's good, too!

I like the graphics, too--quite polished. Not a waste of bandwidth.

Thanks for a glimpse into a typical day of your varying routine.

CUBS!!!!!!! CUBS!!!!!!.. Dude, are you a cubs fan? I have a vague memory of reading that somewhere else. You'd think I would remember a fellow poor doomed cubs fan. Today's and tomorrows games are on national TV so the whole country can see the cubs (lose). I hate losing to the cardinals.

Amazing schedule Phil, I heard you guys were only busy when the Shepherds Fellowship posse came into town. Great job on the Blog.

btw, the last picture in this post wasn't a waste of bandwidth, it was quite funny :)

Who are these bandwidth whiners anyway. The overall layout of your blog was what attracted me to it in the first place! It is SO readable.

For some unbelievable insight into the Emergent church mindset check out http://www.paperstreet.org.uk/ikon/

Also the Dog Pound has a post on it at http://fide-o.blogspot.com

I noticed that you linked to yourself a lot in this post. Are you trying to be blogspotted?

"Phil Johnson Joins the Blogosphere" OK, no one just joins the blogosphere with a blog so fancy pantsy. I've tried and tried . . . lament . . . and still can't figure out this template stuff. Who's helping you on the side Phil? By the way, I am eagerly looking forward to your next evangelicalism post.

Tomorrow I'll do yard work for half the day

Yard Work? Really?
I've seen your yard and I am at a loss as to what you would actually work on for half a day. Do you mow the 6X6 patch of grass with scissors? Re-arrange the pea gravel with a trowel?

I just got back from vacation and did a quick read of the entries that I missed while gone... Thanks for the "Day in the life of a Pyromaniac" Wish I had more time in CA, I would have liked to get together with you for coffee at Starbucks or one of many other coffee establishments in that area...