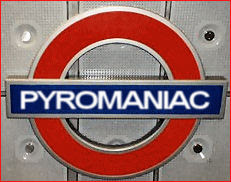 Darlene and I were in south-central London (Southwark) when we got the earliest reports last Thursday that the London Underground had been brought to a halt by something. First reports were unclear. It was a power surge; multiple power surges; a series of explosions. No one at first seemed quite sure what had happened.

We returned as soon as possible to our hotel room to try to make some phone calls overseas. Darlene flipped on the BBC, and it was there that we—and most of London—first learned definitively that what we feared and expected most was indeed true: this was a series of coordinated terrorist attacks.

Early reports from the BBC freely referred to the unknown perpetrators as "terrorists," of course. Terrorists is the right word. It describes precisely what the perps were.

It now appears, however, that such plain language violated the BBC's own canons of political correctness. The Beeb regards the term terrorist as derogatory and therefore unsavory. Such words are officially deemed undesirable in all BBC news reports.

BBC editorial guidelines instruct writers in the nuances of careful, creative ambiguity, and they specifically cite the word terrorist as a prime example of what not to say: "Our credibility is undermined by the careless use of words which carry emotional or value judgements. The word 'terrorist' itself can be a barrier rather than an aid to understanding."

Therefore as soon as the initial shock from the attacks subsided, a memo went out by e-mail, reminding all BBC writers about the policy. The early accounts of the attacks (originally written while the news was breaking) were subsequently re-edited to refer to the terrorists with a more neutral term: "bombers." (Gene at "Harry's Place" has posted a few examples of The Beeb's revisionism.)

In response to queries about this issue, a BBC spokesperson insisted, "The word terrorist is not banned from the BBC." But another look at the editorial guidelines reveals this (and I quote): "We should try to avoid the term [terrorist], without attribution. We should let other people characterise while we report the facts as we know them." In other words, if someone else uses the T-word and you quote it, that's OK. But the word terrorist is indeed officially banned from the BBC's own writers' descriptions of terrorist acts. Those who make policy at the BBC are apparently convinced their own "credibility" would be undermined by such unbridled moral and linguistic clarity.

Thus yesterday's BBC stories about the suicide bombings in Netanya were devoid of any mention of "terror," "terrorism," or "terrorists." The organization known as Palestinian Islamic Jihad—rank terrorists who have repeatedly claimed credit for many suicide bombings and other acts of terror, and whose central business seems to be the recruiting and outfitting of various kinds of bombers who deliberately target innocent civilians—are never properly referred to as a "terrorist" organization by The Beeb. Palestinian terrorists are always referred to with words that don't have such strong "emotional or value-judgment" connotations. Those guys blowing up mothers and babies on public buses are merely "militants." 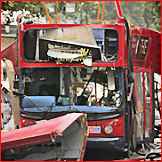 Now we see that the BBC won't deliberately refer to suicidal killers as "terrorists" even when they bomb civilians on the London Underground. No, the geniuses who drive editorial policy at The Beeb are convinced that neutral and ambiguous expressions are much better aids to "understanding."

It's one of the amazing and disturbing ironies of our generation that so many of the gatekeepers in the world of professional journalism (whose main business ought to be communication) subscribe to the postmodern hypothesis that double-talk and euphemism actually increase "understanding," while clarity is actually deemed an impediment to communication.

And it's not just the BBC, unfortunately. While we're at it, let's be really blunt: the same philosophy drives most of the mainstream news media. And the same sort of genteel wordsmithing is also ubiquitous in the academic world, in the world of theological dialogue—and more and more in everyday public discourse.

It all stems from several basic assumptions that have been uncritically adopted by multitudes over the past half-century: "Conversation" is invariably a better option than combat. Uncertainty is always intellectually superior to strong convictions. And moral and ethical neutrality is clearly more desirable than the hopelessly medieval belief that objective standards of good and evil exist.

Now, don't misunderstand. I would by no means suggest that war is always superior to peace talks, that dogmatism is inherently better than diffidence, or that neutrality per se is wrong. I believe the duty spelled out in Romans 12:18 is binding: "If it is possible, as much as depends on you, live peaceably with all men." And "Blessed are the peacemakers: for they shall be called the children of God" (Matthew 5:9).

Nonetheless, Scripture also teaches that the soldier, policeman, or executioner who wields a sword against an evildoer is doing something good. "He beareth not the sword in vain: for he is the minister of God, a revenger to execute wrath upon him that doeth evil" (Romans 13:4).

By the way, miscreants and evildoers do exist, although value-judgments are sometimes necessary to identify them. Moreover, it is gross injustice to insist on always remaining morally neutral. True justice requires not only the ability to recognize evil, but also a willingness to punish it.

In other words, there are clearly times when combat is called for and "conversation" with an evildoer is folly. In some cases, strong convictions are needed and any pretense of benign deference is immoral.

That goes for journalists the same as anyone else—or it ought to.

Yet the high priests and priestesses of the mainstream media remain blindly committed to their credo: moral neutrality is the one permissible dogma of this postmodern era.

It is a particularly foolish—and potentially fatal—article of faith in an age of Islamofascist terrorism.

It's all sort of nauseating really... all this political correctness. I was just shaking my head after reading that Tony Blair is "shocked" at finding out the possible terrrorist may be native born citizens (still Islamofascist). Another comment in the article (by one of there "intelligence" experts) says that she couldn't believe that one of the perps, who was 19, would be at a training camp in Afghanistan because he was too young (who she thinks has been doing many of the bombings in Iraq, Afghanistan and Israel i don't know... but apparently not 19 year olds). Utterly crazy.

We have definitely entered... the Twilight zone

On the other hand, words like "terrorist" and "postmodern" are so overused that objective writers should consider the value of their use. The semantic domain of the English word terror is very broad. “My children can be little terrors.” Your Technorati profile even says Phil “has been terrorizing the World Wide Web since 1995.” Neither of these employments of the term can compare with the London underground terrorists. Language with extreme connotations can cloud rather then clarify.

Your title says it all. Unfortunately, I can't find my dictionary to know what it all is.

One of the home-school moms want to help out here?

So those of us who don't have enough hand-dexterity to, say, turn a screwdriver, we're bad people? Is that what you're saying?

(BBC 5 Live has great live soccer commentary by the way)

More seriously - very well put Phil. I'm reminded that this is true not only in our use of words, but in our understanding of them.

Piper just sent out a FreshWords on how rigorous training of the mind is an important part of training our children, so they can better understand the written word (particularly the Scriptures).

If I may quote:

"The ability to read does not come intuitively. It must be taught. And learning to read with understanding is a life-long labor. The implications for Christians are immense. Education of the mind in the rigorous discipline of thoughtful reading is a primary goal of school. The church of Jesus is debilitated when his people are lulled into thinking that it is humble or democratic or relevant to give a merely practical education that does not involve the rigorous training of the mind to think hard and to construe meaning from difficult texts."

I guess that being PC (politically correct) has extended its ugly hand all the way "across the pond" It is a shame that people cannot call a spade a spade anymore. What is the BBC worried about? Telling the truth?

Thank you Phil for your insightful post. I figured in your Blogspotting you would have commented on my hijacking on of your pictures last week for one of my articles.. but I guess you will keep looking...:)

PS. Going to be in your neck of the woods for vacation at the end of the month... Family lives in Stevenson Ranch...

Fascinatingly, if that credo truly is dogmatic, doesn't it automatically disqualify itself as "postmodern." Read teh rest of my related post here

I want you to know Phil, that I did indeed look this word up in my dictionary, but I am learning to be less of a know-it-all-in-training, so I kept silent, a very great feat for me.

Actually, I believe that the last image at the bottom of the post is quite an appropriate adomonition to any who have an opportunity to confront post-moderns or others in the "PC"-set. "Mind the Gap". There is clearly a "gap" between the way we speak (with clarity) and their "circumlocution", or roundabout speech. We have to be able to bridge this "gap" in order to have any meaningful dialogue. There are excellent articles from "Stand to Reason" that could help in this.
By the way...didn't the Postmodern wave come FROM that side of the pond?

Dooh! Now I feel like a motard (cross between a moron and a retard). Must use more dictionary.

As a professional journalist, I thank you. It has become a great burden to uphold standards which are at odds with the very agenda of a news agency. If we are not pursuing clarity, an element of truth, what's the point? We are not here to balance injustices of the past by creating an imbalance of reporting in the now. It's all shame and embarassment on my profession when we can no longer clearly distinguish evil.

I'm OK with them not using 'terrorists' provided they use 'murderers' instead.

"I'm OK with them not using 'terrorists' provided they use 'murderers' instead."

I'm reminded of Tripp's "War of Words" in which he says of "idol words": "our words are shaped and controlled by the thoughts and motives of our own hearts...Christ says (in Luke 6:43-46) that a person's words come 'out of the overflow of his heart... the people and the situation around us do not make us say what we say; they are only the occasion for our hearts to reveal themselves in words.'"

These words reveal themselves when heat is applied... in this instance, the heat was the supercharged aftermath spawned by the simultaneous bombing of three tube trains and a bus. In the volatile blur of telling the story as it unfolded and the perceived imminent danger to themselves, BBC journalists gushed from the heart. They used the word "terrorist" because that's indeed what they believe the now-known 4 (and counting) Islamic fundamentalists to be.

(And thanks to Google's cache it's possible to help them relive the hypocrisy.:-))