My first introduction to Bunhill Fields was an article by Warren Wiersbe in his book Listening to the Giants: A Guide to Good Reading and Great Preaching (Grand Rapids: Baker, 1980). Wiersbe was my pastor for six years and one of my earliest mentors. His book and its predecessor, Walking with the Giants, introduced me to a number of authors and historical church leaders who became my favorites. The Bunhill Fields article (which, if I recall correctly, was an appendix in Listening to the Giants) made such an impression on me that when I first began to visit London in the early 1990s, I always tried to stop by that little-known non-conformist cemetary, where some of the greatest figures in Puritan and Baptist history are buried.

It's a peaceful place and a rare bit of quiet greenery in a noisy, concrete part of London. To get there, first make your way to the Liverpool Street Station. From there it is an easy quarter-mile walk to City Road. Or you can take your choice of the 214, 275, or 205 buses to City Road. Get off at Wesley's Chapel (which is well marked). Bunhill Fields (which is not so well marked) is directly across the street. 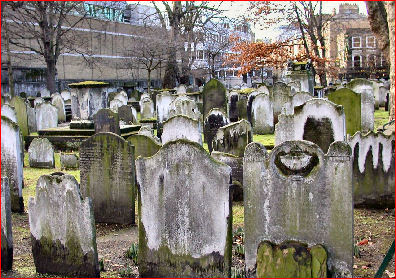 I suspect the cemetary's history is not fully appreciated by the hundreds of modern Londoners who walk through it or eat their lunch there daily. But here you will find the graves of several Protestant luminaries, including John Owen, John Bunyan, John Gill, and John Rippon.

Here's an account of Bunyan's death and burial, from an 1884 work titled Brave Men and Women, by O. E. Fuller:


Bunyan's tomb was restored in 1862, so what you see here is a Victorian-era monument, but the gravesite is the original:


When the refurbished tomb was complete, Charles Spurgeon was asked to be the speaker at a dedication service held May 21, 1862. The weather that day was too rainy to hold a service by the gravesite, so Spurgeon spoke from the pulpit of Wesley's chapel across the street.

You didn't have to be named John, and you didn't have to be a theologian to be buried at Bunhill Fields. This is also the final resting place of literary giants such as Daniel DeFoe (author of Robinson Crusoe), poet William Blake, hymn writer Isaac Watts, and dramatist Joseph Reed. Also prominent are the graves of Susannah Wesley (mother of John and Charles), Thomas Bayes (the mathematician who developed Bayes's theorem of inverse probability and gave his name to the theory known as "Bayesian probability"), and George Fox, founder of the Quaker movement.

Here's a map to the famous grave sites in the cemetery. And here's a website with more pictures and information.

One of the most intriguing—and disturbing—tombs in the cemetary is the vault of Dame Mary Page. One side of her tomb says, "Here lyes Dame Mary Page relict of Sir "Gregory Page Bart. She departed this life March 4 1728 in the 56th year of her age." The other side includes this timeless epitaph: 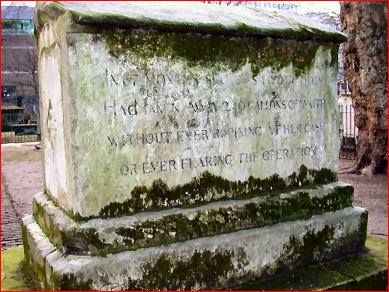 "In 67 months she was tapd 66 times
Had taken away 240 gallons of water
Without ever repining at her case
Or ever fearing the operation."

The size of Dame Mary's tomb indicates that she was from a very wealthy family. Indeed, John Gill apparently disapproved of the ostentatious display of honor shown to the Lady at her funeral. Soon afterward, Gill wrote a piece titled "An Essay on the Origin of Funeral Sermons, Orations, and Odes. Occasioned by Two Funeral Discourses, Lately Published on the Death of Dame Mary Page, Relict Of Sir Gregory Page, Bart. The One by Mr. Harrison, with an Oration at Her Interment; and an Ode Sacred to Her Memory. The Other by Mr. Richardson. With some Observations on each of them."

I have for some time been of opinion, that the custom of preaching Funeral Sermons, and making Orations at the interment of the dead, took its rise from some such practice first in use among the Heathens. Two discourses of this kind having been lately published on the death of the Lady Page, both attended with some odd circumstances, which I am sensible you are no stranger to, they have occasioned some fresh thoughts on this subject, the result of which I now send you, together with some few observations on the said discourses, all which I humbly submit to your impartial judgment.

The full essay, which is much to long to reproduce here, is part of the John Gill collection available from Ages Software.

John Bunyan was pretty cool. It is neat that you happened to show some pictures here and talk about him at the same time that I am reading through The Pilgrim's Progress with my kids. In addition, we read through some background info on Bunyan and his life.

In 1660 he was sentenced to jail for 3 months for preaching (it was outlawed then). However, he was jailed for 12 years because he would not promise to stop preaching. He vowed he would do what God had commanded him to do or remain in prison until the moss grew on his eyelids.

I wonder how many professing Christians today would even spend one week in prison for such a thing.

Man... they sure don't make many Baptists like Bunyan anymore.

Fascinating stuff. If I ever get to London, I'll definitely make a trip to Bunhill Fields.

I'm loving the London Travelogue. I was there about 6 years ago and seeing and reading about the sights I saw then brings back great memories.

I walk past Bunhill cemetery every day on my way to work.
Coincidentally, I was reading the back cover of a John Owen book I have on my desk, and I discovered that he was buried at Bunhill.
Five minutes later I click on the Pyro blog and it is the subject of the day!

I have also yet to visit Wesley's chapel, the centre of Methodism, which is across the road.

One day when the weather is good i'll take a walk down to Bunhill on my lunch break and check out the graves of everyone's favourite dead theologians! Perhaps they should move Jonathan Edwards' grave from the USA and complete the set!

Can you share more pictures of the tombstones and what is written on them?

And I thought it was cool when we got to go to Baudelaire's grave. . .

I know a little about Dame Mary Page, whose grave you show in your first July blog. She was the wife of baronet Sir Gregory Page (1669-1720), whose father was a wealthy London merchant, shipwright and Director of the British East India company. Mary's husband was also a successful merchant and an MP for Shoreham. Mary had four children and died on 11 March 1728, aged 56, very likely of paracentesis or Meig's syndrome. Her eldest son, also baronet Sir Gregory Page, inherited several large estates including a manor house in Westcombe Park near Blackheath; a mansion near Wricklemarsh hung with paintings by Titian, van Dyck and Rubens and sitting in 250 acres of parkland; and a mansion called Page House at Eltham - later renamed Well Hall House and finally demolished in the 1930s (after having had several interesting and eminent tenants). The site is now a public park called Well Hall Pleasuance.