Leftover goulash from a frenetic week 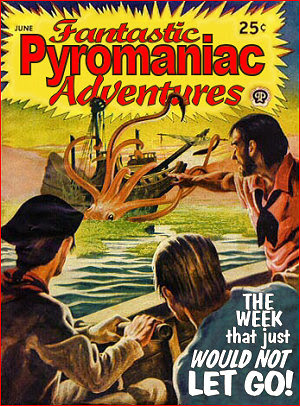 I've had a hard time finding opportunities to blog this week. It's certainly not that there's nothing to blog about. But I've simply been too busy to write everything I'd like to say about all the scraps of this 'n' that which catch my attention during the course of a typical week.

And this week was a lot more "typical" than most—with C. J. Mahaney's visit to Grace Community Church, John MacArthur's appearance on "Larry King Live," Pat Robertson's Stage-One Plan for World Peace, and Karl Keating's use of John MacArthur as a foil for some rather blatant cheap shots. You might have expected me to comment on any or all of those events. I would have, if I had found the time.

However, I'm grateful for friends in the blogosphere who make my job easier. These guys said pretty much what I wanted to say—and they all said it better than I would have, anyway:

Disclaimer: Technorati has become wll-nigh useless, and even The Truth Laid Bear seems to be seriously crippled lately, (completely losing track of some 300+ links to PyroManiac in the past three days alone). So it's not easy to ferret out who is linking to the blog nowadays.

If I have missed anyone who desperately hoped to get BlogSpotted, I'm sorry. But time is short, the hour is late, I'm really tired, my dial-up connection is slow, and all the standard search-engine tools are working against me.

Here, however, are a few blogs that have caught my attention by linking here:


That's all I have time for at the moment. I have a very full weekend, and I'm leaving for Tulsa Monday morning. I'll post again when I can, but no promises about when that will be.

Shame on you Phil for not being more on top of things. The hockey lock out is over and now we Canadian spend our time getting all excited at the prospect of hockey making its return.

We also spend our times analyzing the differences in the way we talk from the way Americans talk. Tim Challies has an excellent example of it.

As for me and hockey, well, I'll just say that I really enjoyed the Saturday night movies they played in lieu of hockey.

Considering you had such a frenetic week, I find it amazing that you STILL 1)produced such a long and well-written blog, 2) started it off with an amusing and eye-catching comic graphic, 3) provided a good number of links to superb articles, 4) blogspotted as many people as you did, and 5) threw in a couple of catchy blog titles for good measure.

I'd say that's pretty impressive output in spite of what you've been up against. Will definitely keep you in frequent prayer as you manage your way through a busy weekend. And I trust you'll have a SAFE and well air-conditioned trip with lots of reading time.

I supposed after your visit with CenturiOn, we'll see some supersaint rays glowing from the PyroManiac logo in the first post-visit blog from you.

Thanks for the link Phil, but intimidation was certainly not my intent. I guess I'm just a nerd at heart, the cube just irritated me until I got into the group theory.

It seems kind of strange that you seem to want to insist that Doug Wilson is more or less just another follower of the post-modern fad. I really don't see how Peter Leithart's post leads to that conclusion. Leithart makes a clear comparison to reformation theology(I wonder if they called it that back then.) which clearly took the church in a new direction. I have a hard time seeing how Luther would have been a post-modern but if suggesting a new understanding of an old issue is post-modern, then maybe he was.

Tulsa? Time to take on the WoFers, huh?

Great stuff, Phil... I was finally able to check your blog again after getting through the stinkin' TMC SECURITY SETTINGS. Geez, you'd think this campus was some sort of center for national security. I had quite a time last night and this morning trying to get my computer to connect. Anywho... keep posting, and don't get so busy you get "burnt out"!

1. I never even implied that Wilson is a pomo, much less "insist[ed]" on any of the notions you have imputed to me.

2. If you follow the thread back to where it began, you will see what I really said: that Doug Wilson's critiques of pomoism are some of the finest, most pithy stuff I've seen on the subject. I agree with him about pomoism. I salute him for the stance he has taken against pomo-style thinking. And I admire his crystal-clear analysis of what's wrong with the pomo mentality.

3. My only remark even obliquely connecting pomoism with Auburnism was an offhanded reference to some of Wilson's fellow-travelers in the multifarious campaign to define "the objectivity of the covenant" in sacramentalist terms. And I didn't even suggest that they were pomos. What I said was that they might not be entirely happy that Doug is attacking pomoism. Because the fact is, the Auburn Avenue theology has received a very sympathetic hearing and enjoyed outspoken support from postmodern people employing a postmodern rationale.

4. I wonder if you actually read Leithart. I have two remarks about your comments on Leithart's post:

a. It's truly amazing how few words it took you to move away from the actual point I was making to the invocation of Luther's name, which has nothing whatsoever to do with anything under discussion. I especially got a kick out of how you pretended I had actually labeled Luther a pomo. Kudos for a very fine example of how to derail a discussion quickly.

b. However, since you're the third or fourth person who has dismissed the Leithart link by saying you don't see how it's relevant, please permit me to quote the key paragraph:

"Those allied with Auburn Avenue, for example, are in many cases more sympathetic to certain moves in postmodernism than the opponents of Auburn Avenue. Making a case for a heightened view of sacramental efficacy is easier, for example, in an age of spiritism and New Ageism than it is in an age of big machines and scientific method. To take another example: Given the intense attention to the philosophy of language in the last century, we have more resources for distinguishing between biblical and systematic uses of terms than Charles Hodge had. Or, to take another example: those associated with Auburn Avenue are more likely to borrow insights from non-Reformed theology than their opponents, and this too links up with the massive practical ecumenism that has been evident in recent decades in the US and is evident on an even greater scale in the Southern Hemisphere. If that's the case, then the theological shifts that are represented by Auburn Avenue will have a certain cultural 'traction' that similar positions in the past did not have."

Remember, Leithart is an advocate, not an adversary, of Auburnism.

5. Anyway, just to reiterate once more for those who may still be unclear on the concept: my original remark was simply that some in the wider Auburn movement might not be entirely happy for Doug to turn his guns against pomoism, because in doing so, he undermines some of the "traction" they have been getting when their arguments are processed by people who look at everything through pomo-colored glasses.

I must agree, Chopra (lunatic) gets more and more shrill with every appearance he makes. His appearance on Lee Strobel's show a few months ago was a classic. Greg Koukl handed Chopra his hat. He tried that "The Bible is in the 21st iteration" line on Koukl who then told Chopra he had no clue what he's talking about and exactly why. This conversation went on and on, and Chopra became visibly angry by the end. He does well in large panel discussions only because his ability to defend his views are shielded from scrutiny, but in environments where he's alone with one person, he can't even articulate the basics of his own position well, much less critique Christianity. Any Christian that knows basic apologetics can handle him, much less MacArthur or Koukl.

Phil,
I appreciate your more in-depth explaination of your comments. It seems that by "Doug's Auburn friends" you must not mean gentlemen that have spoken at the Auburn Ave Pastor's Conferences, but the Federal Vision/New Perspective On Paul/Auburn Ave/Theology Wonk bloggers that have written on this stuff.

I think that the negative response you're getting is because a couple of people who love and study (under for some of us) these men (including Leithart)and loath all things post modern along side them. I would like to hear you flesh out the philosophical and theological connections that you are seeing hear, because I have a feeling, from the sound of your last comment, that most of your opinions on the matter are second-hand or ad hom. Anyways, thanks for continuing the dialogue.

BTW I went and rented "Winged Aviation" and absolutely loved it! I've watched it twice now and watched the special features. Wonderfully done movie. I want to go see "The March Of The Penguins" too, but my wife isn't interested! Cheers!

I appreciate your clarification. I think I probably just read a little antagonism into your tone or something. Like Larson Hicks said, the reaction you are getting from some people is probably because we count these men friends. At first read it sounded like you might be pitting the two men against each other when a few of us know firsthand that that would be a gross mischaracterization. Thanks again for the clarification and sorry for the zealous but misguided former comment.

Phil,
Good preaching this morning at Grace. 1 Cor. 10:13 is one of the few verses I remember from AWANA (sad that I have to say "few"). Just for the record, I didn't groan when I saw your name on the bulletin, as I was quite excited. I'm pretty sure that's the first time I've heard you preach at Grace; I hope to see you preaching some more. God bless!

The Rough Woodsman recommends IceRocket in place of Technorati.

I'll just copy my last post on to this thread, because the same loical errors are still being made by Phil. However, I only visit this site once or twice a week, so I am probably throwing in my two cents long after everyone has left again. Here it is anyway:

It is like saying that insulated interior-of-South America Indians who believe in a god (albeit a pagan one)are more fertile ground for the gospel than Western scientists with phDs are. One group believes there is a god but is confused about who he is and the other has expended great effort to refute all possibility of a god.

How you then conclude that Leithart is conceding substantive postmodernism *within* FV theology is beyond me. I think you missed the point.

For the umpteenth time, I did not say, or even imply, "that Leithart is conceding substantive postmodernism *within* FV theology." Reread the thread. I think I have explained myself sufficiently.

All you did is claim that you didn't mean to paint FV guys with a pomo brush after the fact. I read what you said. You thought DW's slamming of pomo was hilarious and then said you didn't think some of his FV buddies would appreciate it. You're dellusional if you've convinced yourself you weren't painting FV guys with a pomo brush. If you meant 'Tim Enloe", then you should have said that instead of the sweeping statement you made.

This blog is irresponsible. You market this thing as broadly as possible then snipe at everyone with sarcasm and generally engage in name-building antics.

Thsi blog should be called 'Egomaniac".