PyroManiac breaks a rule of thumb

It's never been my vision to make this blog a commentary on popular culture. I'm concerned primarily with biblical, theological, and church issues. Even on Mondays, when my own blogplan gives me lots of latitude to write about almost anything, you're not likely to find me commenting much on movies, television series, popular music, celebrities, professional sports (the Cubs don't really qualify here, do they?), or any of the other standard icons of popular culture.

Let me be clear: I don't have any problem with blogs that analyze or critique pop culture from a Christian perspective; I read and enjoy a few blogs that do it very well. But I'm neither a movie critic nor any kind of expert on the pop fashions of the current generation.

I wanted to start with that point today for two reasons:


This may surprise you even more: It's not just a movie; it's a French film. It's a pretty artsy French motion picture that was nominated for an Academy Award® a few years ago. What's more, it's a movie I wouldn't recommend for youngsters.

Shocked? Don't be. The film is "Le Peuple Migrateur," Jacques Perrin's 2001 documentary about migratory birds. It's also known by two English titles: "Winged Migration" and "Travelling Birds." Unless I missed something in the translation from French, there's absolutely nothing suggestive or morally inappropriate anywhere in the film. You can watch the whole thing without having your sanctification disturbed in the least. It's rated "G."

There's a hunting scene that might be disturbing to some children, and another sad and very graphic incident where an injured bird learns the meaning of the expression "food chain." But aside from those two scenes, I can't imagine anyone finding anything shocking or offensive in the film.

In fact, the film graphically portrays the exquisite beauty and intricate wisdom of creation. It's a wonderful example of the truth of Romans 1:18-19. It ought to be clear to any rational person that the instincts and abilities that enable these birds to migrate with such accuracy in every conceivable climate did not "evolve" by accident.

I saw this film last week on that bus trip I took. We had one of those tour buses equipped with video screens and a DVD player, and my friend Dave Cotnoir, a French Canadian, had a copy of this DVD with him. Apparently, "Le Peuple Migrateur" received a lot of positive attention from film critics and foreign film buffs a couple of years ago. It was a limited theatrical release in America. Somehow I totally missed it. Too bad. This one would have definitely been worth seeing on the large screen. 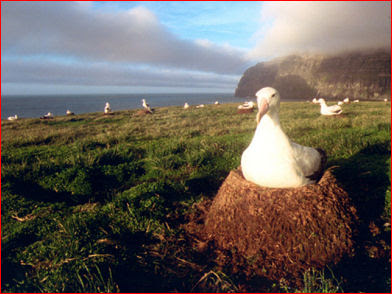 The film is visually stunning from the very first frame. The cinematography is more breathtaking than anything I have ever seen (and that includes the IMAX scenes filmed on Everest). The best parts feature close-ups of birds in flight from angles you could scarcely imagine possible. At first I thought this was just a remarkable example of computer-generated special effects. Then I thought the filmmakers must have somehow filmed birds in a wind tunnel and used blue-screen effects to superimpose them on scenery. But soon I realized they must have somehow literally filmed from within a flock of flying birds. I briefly considered the possibility that they might have developed a digital camera small enough to strap to a bird. But the camera motion was too perfect for that.

Fortunately, there's a special featurette with the DVD that shows you how they did it. In some ways it's even better than the actual film. The "making of" documentary reveals how filmmakers raised hatchling flocks of several kinds of birds (snow geese, cranes, and others), "imprinted" them with the idea that the filmmakers were their parents, taught them to fly alongside ultralight aircraft, and then filmed them in flight at spectacularly close range. The film is a remarkable achievement.

It's not a perfect film. There's almost no narration, so you won't learn many objective facts about avian migration. Most of the information given is conveyed in minimalist subtitles with next-to-nothing factoids like "The arctic tern migrates 12,500 miles from the Arctic to the Antarctic"; and "The Greater Sage Grouse lives in Idaho." That's disappointing, because I found myself constantly wanting to know more about the birds I was seeing.

There's also no plot to speak of, and some of the flight scenes in the middle are so long that if I weren't part of a captive audience on a bus, it might have lost me about halfway through. But at the very point where I began to be aware of a sense of boredom, something happened to capture my attention again. At the end, I was enjoying it so much that I was sorry to see the credits roll.

The soundtrack is almost as beautiful as the film itself.

The film took more than three years' to make, with a crew of 450 people, in numerous locations spanning all the continents. It literally offers a birds-eye view of the whole earth. It was all shot on 35mm film. Each cannister of film lasts only four minutes, and a lot of the scenes required hours of filming while waiting for something to happen. This was surely an expensive film to make, but well worth the effort and expense.

The filmmakers had no agenda to demonstrate the glory of God. As far as I know, they are as atheistic as any French scientist. But in an amazing way, they have accidentally documented the grandeur and power of an all-wise Creator—not to mention His love of beauty, diversity, and order.

And while we're on the subject of birds...

Here's why penguins are my favorite feathered creatures:

Hmmm, I wish I had seen this post before spending $30 on "March of the Penguins". After my family and I paid movie prices to see a "decent" movie in the theater setting we left asking why we didn't simply turn on Animal Planet and save the money.

This sounds infinitely better. If there were no silly anthropomorphisms in the French bird film, it will easily be better, no doubt.

Thanks for breaking your rule of thumb!

If you can take a few offenses, might I suggest you watch "The Blue Planet" series (1-4).

This will take you out of the air and into the ocean to see God's beauty and greatness in His creation there as well. Visually stunning, as Winged Migration is. Being an "ocean" type of person I favored The Blue Planet. :)

Don't worry too much; I highly doubt that recomending a subtitled, French, nature film about rare birds qualifies as a pop-culture reference.
No offense, but I think I'll stick to the "Crocodile Hunter" and "When good circus animals go bad"

Phil, I'm an avid birdwatcher and when this film came out, it was right up my alley. It's incredible - even if you're not into birds. It's a slice of life you likely have never seen before.

It's nice to see you recommending this.

i enjoyed this film as well. absolutely beautiful. but hey, i enjoy anything to do with God's creation. at the time I watched the movie, i was living with a roommate. she and her daughter endured about five minutes of the film before their eyes glazed over and they attended to some higher calling. this response on their part was not surprising since they take great pride in movies like "The Scorpion King". sigh. i never could sway them.

You may be interested to hear Ben Witherington's thoughts on "March of the Penguins" - check it out here.

Don't you hate it when people shamelessly try to sell something in comments on a blog?

In light of your regret at not seeing this in the theater, I think you should consider going to see "March of the Penguins". I went and took my four boys (ages 7 to 14) and we all enjoyed it, "silly anthropomorphisms" and all. I love Morgan Freemans narration and the wonderful cinematography.

Incidentally, the video of the penguin being slapped through the ice is a well-known bit of digital fakery. There's another version floating around the Net where instead of being hit with a flipper, he's tripped.

i REALLY need to get you interested in soccer.

After "the incident", I can't do bird films (even as much as I love Hitchcock, I'll never see that one). The freaky Avian flu epidemic (heading to CA possibly) has heightened my phobia. But penguins are cute (my 8 year-old stepson seconds the thumbs up vote for "March of the Penguins") and I would watch a documentary about hummingbirds since I find them fascinating.

Meantime, while everyone is going link happy, how about a round of penguin batting? Now that's addictive...

There is another french film which I think if from the same makers. It is called "Microcosmos" and it too is incredible. It up close photography of bugs in action. No narration, so no evolutionary garbage. It is visually fascinating. Thought you might like the recommendation.