The last of the comic books (for a while) 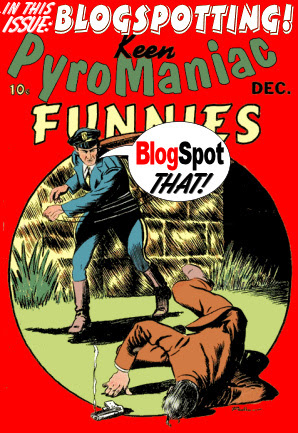 Technorati is getting worse, not better. It hasn't worked right for weeks. These days at least nineteen times out of twenty, when I try a Technorati search, I get the "servers busy" message.

Technorati was already slow and unreliable when I first started using it. I assumed the problems would be short-lived. But the situation has grown steadliy worse. I've tried in vain for several weeks to find out if they are even aware of their own meltdown or if they have a timetable for correcting it, but I have finally given up.

Click here, for example, to see a humorous example of Technorati's ostrich-head-in-the-sand policy. (I've linked to the Google cache page, because odds are, Technorati won't be working if you try to do an actual live search.) Apparently, there's no plan to make Technorati a viable commercial search engine, so I have removed the Technorati link from my blog template.

That's why today's BlogSpotting is brought to you courtesy of IceRocket.

Oddly enough, the main topic of discussion (as it has been since Thursday morning) is a single, throwaway-gag blogpost that, ironically, comprised fewer words than any other post in the history of PyroManiac. Here's what you'll find on other blogs that link here:


That's all I have time for. Enjoy Labor Day. I'm trying to think of a subject for Monday that doesn't require a lot of work to write.

Actually Phil, Mr. God No Liar, aka Andrew Bain, aka obsessive email spammer extroirdinaire, has written on this already - in several places.

I think he has at least 5 or 6 sites or blogs - and they all say pretty much the same thing. Him, Marc Carpenter and 3 other guys in the world are saved, and everyone else is a God hater.

Thanks for the link, Carla. He got my name wrong, but then, he can't seem to get anything quite right.

Honestly, I have no idea why he does what he does. He's about as edifying as a brick in the forehead.

I keep banning him from sending me his 250+ distribution list emails, but somehow he finds a way around it.

Buddy demands an audience, that's for sure. I've often wondered if anyone responds with anything other than "remove me from your list"?

Maybe with something like "wow, thanks for the insight, I now hate everyone too, can I be your friend?"

I fear humor itself may already be an endangered species, because when you start having to explain every joke, none of them will be truly funny.

The reality of it is that there are simply a myriad of ways to generate humor. Did I miss something? Before post modernism was striking a woman funny?

Certainly a gentleman with your obvious penchant for the creative could have found a more edifying way to be humorous.

If you had seen the idea for a comic-book-cover tribute to homeschool moms I didn't post, you would be congratulating me for my restraint.

Phil, you hurt my feelings with all of the gratuitous violence you've been showcasing on your comic book covers!

Last time a woman - and now a man getting decked!

You don't actually endorse that type of violence do you?!

I noticed that everyone is on a journey these days as I plodded through the blogspotting -- Phil's on vacation, IM is on a journey which, apparently, is going the same way the folks at antithesis (which is not to say Rob Schlapfer) have been having gone gotten, etc.

I'm the only one not going anywhere. I must be insular.

In the south there is an expression used when one eats something that is extraordinarily delicious - "Slap yo' momma good!"

I remember wanting to use that to sell my beverage products and having some people go into complete fits about it.

I suppose the pc-chihuahuas still gnaw.

I put you on my "Check Daily" list because I appreciate your theological muscle - and a sense of humor.

Then, again, I do like the 3 Stooges - where everybody gets smacked down.

Phil, thanks for the nice BlogSpot and the complements. Could you fix the link to send folks to the blog, and not my profile. Thanks.

Done. Sorry, I don't know how that happened.