BlogSpotting (because I couldn't think of anything else to say) 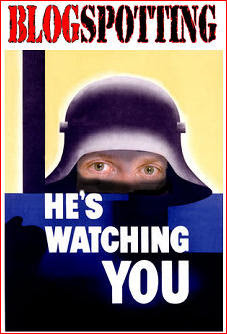 To increase the speed at which Technorati and IceRocket get to your new posts, you can just visit their "Ping" site. Once you bookmark the link to the ping related to you site, all you have to do is visit that ping link and it knows you have a new post. So for example, IceRocket's would be http://www.icerocket.com/c?p=ping and you would then enter your blog. When you hit submit, then bookmark the resultant page. Now when you go back to that page, it automatically pings them to let them know you posted. Other fancier blogging software actually allows you to integrate this to your code, but us poor saps on blogger must rely on doing it manually, or waiting for new indexing.

The fact that IceRocket works well doesn't come as a surprize to me, as IIRC it is owned by Mark Cuban (owner of NBA's Dallas Mavericks). Technorati certainly has been better, but still isn't what it could be. I'm sure it's an issue of funding as much as anything, as I can't imagine revenue streams being all that large for something like that (yet).

Big Chris
Because I said so blog

It's been a while since the whole Mohler/alcohol thing blew up. You have probably noticed some of my Anti-Mohlerite posts as well.

It would be good of you to address the alcohol question that Mohler raised at Reformissionary's blogsite:

Ah, Phil, one of my favorite WWII posters. Thanks.

Hey, I was thinking "convivial" meant something like "fun to be around," and I was fine with that, too!

Pyromaniac, do those liberal do-gooders over at Google really need more publicity?? Come on!

Regarding blog search engines, I agree that the Blogger interface leaves much to be desired. I prefer the Google GUI myself- same results as Blogger, but better looking.

Phil, you are killing me with the NT for "goth girls." I almost split a gut. "The Gothpel" is about as funny as the Bible for "Biker Grandmas" back in July. May we never lose our appreciation for satire. You lighten the mood, but make a serious point.
Brian

Is that wrong? Can someone tell me what that's wrong?

It's not wrong to want to know where your stats are coming from. It would be self-deceptive to say I don't care if anyone is reading. And most importantly: it proves to me what a great friend you are, Phil.

Not that I need proof, mind you. I'm just saving up for the day that someone tries to tell me, "That Phil Johnson is no friend." Anyone trying that stunt has about 2,000 hits on my blog to contend with. In that respect, you are a better friend than my wife.

Just don't tell her I said that.

You made me tear up again, you know. Phil, where do you dig these covers up from? Was this one a Johnson original?

Maybe you should trademark your spoofs. You never know if some graphic artist from Thomas Nelson might happen upon your blog, and think, "Hey! That's brilliant!" (He'd be right, though he wouldn't quite mean it the way most of your readers would...)

Be careful, else you may be surprised to see one of those things actually land on a bookstore shelf someday.

Priceless.
As someone who was very much into the punk and metal scene I have to say that piece of ironic wit is very pertinenet to me.

Rock & Roll and in particular punk and metal are predominantly driven by discontent. I could not reconcile that with my faith and salvation. I am abundantly content now thanks to Him!

After several years of not listening to any secular music, a kind of detox if you will, I every now and then do listen to the likes of Metallica or Social Distortion with a very different view. I can listen and enjoy the music but insofar as it helps me to one; reeber what I was saved from, and two; engender a more fervent love for the lost as I listen to them crying for help and satisfaction in everything but what they really need.

That said, I could never desire to "get back into the scene" in dres or otherwise. That man is dead.

I DO listen to some Christian pop/rock though. When I was a teen all Christian contemporary was either
A. Good music with terrible/heretical lyrics.

B. Terrible musically with Ok to good lyrics.

These days there are some good ones though that I think of first fr the messaether lyrics convey and their musical skill, or style second. But you have to look hard.

Although it took a while musicaly I predominantly prefer old hymns now simply due to content. I don't care what style it is as long as it is properly portaying God and the Christian walk.

Well, Phil, let me just make it clear that I do NOT identify myself as "Emergent." It would take me too long to detail why I found your last thread on the topic "hilarious on a few different levels." Suffice it to say that I think both sides lived up to their stereotypes and both sides scored some good hits on the other.

one salient oversight thinks that Phil should address the alcohol question. I'll drink to that!

I was confused by this blog post to tell you the truth. What is the point in all the linking?

Hey Phil, I haven't been around the blogosphere for a little while, so I wasn't sure if you had noticed that Michael Haykin has started a blog? Would that blogdom had more minds like this!

Phil, what do you consider cheap?

Love the Gothpel for Girls bit. :) Bob Beeman (of Sanctuary, The Rock & Roll Refuge), my former pastor and one who discipled me as a new Christian, would get a kick out of this.