This is where I am going to be Today

You know what? I'm too tired to write the next post in the "Modern Prophecy" series. I realize yesterday's post was about five times longer than optimum. (I probably should have held the Adrian Rogers anecdote out till today and made it a post on its own. If you skipped it because of the overflow of words yesterday, go back and read it.)

I also don't have the energy to do a BlogSpotting post.

And despite the undue length of yesterday's post, I neglected to mention two items I wanted to headline: 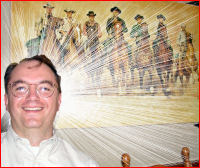 Speaking of Turk, I'm planning to have lunch with him today. Business brings him to Tulsa once a year, and today happens to be the day he had scheduled to be here this year. When he learned last week that I too would be in Tulsa, he tried to rearrange his schedule so he'd be in Memphis instead—but without success. I have bullied him into meeting me for lunch at a restaurant here in Tulsa. We're going to trade jokes about home-school moms.

The last time I had lunch with Frank was an unforgettable day. He's a really bad influence on me. Brace yourselves for the worst.

Wow. Thanks, man. Your website, back in the day, was an enormous influence on both myself and TulipGirl as we explored what it meant to be Reformed. So this means a lot coming from you.

I want to see a post on the homeschool mom jokes!

Thanks for the tip to Reformata.

Big Chris
Because I said so blog

I have it on good authority that HS moms are not in the slightest way, funny. I think Phil & Frank will run out of things to talk about, very quickly.

Phil: In honor of your meeting with Frank, I suppose the final title of your trilogy of posts could be "This is where I was today," or even "This is where Frank Turk was today."

I agree with you Carla. Actually, they're going to go over home school catalogs and look for dictionaries.

Phil, just wondering: since you have so much respect for Discoshaman, do you agree with his picks for 2005 Best Weblog Awards?

Thanks for raising that point. My eyes bugged out when I realized I'd posted them without a warning label.

I selected the blogs in each category which I thought had the most merit as blogs, not the ones I agreed with.

However, I should have stated that when announcing them. More importantly, there should have been a massive non-family-friendly warning before people clicked on them.

I'm assuming that was the gist behind your question. Regardless, it served the purpose of bringing it to my attention. So thanks. :)

As soon as MT lets me log in, I'll add a warning.

Uh, Phil... the title of this post seems awfully close to a prediction of the future. Is it based on Divine revelation?

It's amazing... maybe God just speaks to people in Tulsa. From now on, I shall call you Oral Roberts Jr.

Noticed some changes on the blogroll...Fide-o is no longer stellar. Pecadillo is no longer "aptly named". What has brought about such things?

I love the last two days of posts Thanks for being you Phil your a blessing to the Body of Christ I must confess I had been less than blessed by some of the timbre of this debate.


I think the point I’m making is that we(Reformed-Charismatics) have been confused by this series of posts on your site.


The two subjects(modern prophecy vs modern day false prophets) in the same series of posts brings all this debate.

The first subjects provokes us(Reformed-Charismatic) to ask: Are you saying that we in Sovereign Grace and New Frontiers are false prophets? or that we lack good judgement?This brings unnecessary division between all of us who are Together for the Gospel.
It causes confusion because Phil isn’t really talking about us(Reformed-Charismatic).

In the second subject-Modern False Prophets there is no disagreement( between Reformed and Ref-Charis) and there is no confusion. Hence now we who are continuists are made to look like we like to argue which generally does not characterize us though I think some of us have lost our cool-including me) we just want to clarify the fact that what we do in our(Reformed-Charismatics) churches is no different than the preaching(the forth-telling) that you(Reformed-Cess) guys do.

Additionally I have been reading off-handed comments and hearing off-handed comments for years that are a tad condesecending and this hurts unity. We love you guys and you love us. We need each other in the Body of Christ and we need to unite around the Gospel. I think the irony is that dead orthodoxy is just as dangerous as mysticism.

other than that your the man--when I went to grace and was at Master's I went to Sojourner's that was back in 1995(Bookman and Stead)--since then Grace Life has taken it to the next level so many of my buddies were blessed by the fellowship in Grace Life and the ministry(do you know Jonathan Cross?) & I love your sermon on the Pastor and Joy(and some of the things I have been reading lately in a dialogue between you and Dave Doran).

Yeah, my wife will be a homeschool mom one day...and she's not very funny. She sure is cute though. And nice too!

Oh, I might have to laugh. Isn't Discoshaman-- with his questions for the anti-warmongers, sending his children to a Mennonite (pacifist) school? :-)

Yep. :) We've had to ask our yellow-haired monkeys to tone down the militancy just a bit while at school.

And we've taught our children to respect the foolish naivete of others. It's a tolerance thing. . .

Discoshaman--
Keep this in one in your bookbag; in case you need it:
"A foolish consistency is the hobgoblin of little minds." (Emerson) :-)

Heh! I'll keep that one in mind.

After commenting here, I surfed over to Touchstone magazine's Mere Comments and found an interesting article, for anyone interested in "mixed" education, posted Nov. 17:
"Can divided Christians teach children together?"
I think they may refer more to Catholics, Orthodox, and Prostestants, but still interesting.