Now back by popular demand: BlogSpotting

Whoa. I just noticed that my last BlogSpotting post was back in September. Forgive me for neglecting this important duty. The humor quotient here at PyroManiac is suffering, I fear. I'm sure I've also squandered more opportunities than I want to think about to pay tribute to the homeschool moms. Perhaps this will help make up for it: 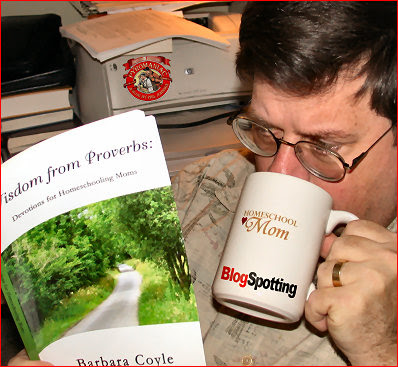 Now, down to the bidness at hand:

That's about all I have time to write. I'm sure I missed a lot of links. But I'm not ignoring anyone on purpose. If the opportunity arises, I'll try to do another blogspotting post next week. (I was originally scheduled to fly to Tampa for some meetings on Tuesday and Wednesday next week, but I had to cancel the trip because Pecadillo was accepted into the LAPD's police academy, and Wednesday is his induction/orientation day. Darlene and I are invited to the festivities, so we're staying in town.) Maybe I'll have time to do some more BlogSpotting. Other than Pecadillo's copification, my calendar is pretty clear next week.

Is there some sort of inside joke about homeschool moms?

dbd: The homeschool moms are to PyroManiac what Margaret Dumont was to Groucho Marx. Don't nobody else mess with them, though, unless you really want to rile me. I'm married to one of them, and she's the love of my life.

That comic cover is a keeper. My kids will get a kick out of it. That 5th line to the 23rd post just kinda gets to ya...doesn't it?

Stomping and grovelling however, is entirely within the realm of possibilities.

And, whatever you're drinking in that mug, must taste so much better than whatever you drink in Frank's mug, I'm sure of it.

Congratulations on Pecadillo being accepted into the LAPD's police academy.

Our middle son (like you, Phil, we've been blessed with three of 'em) is now in his first year of college and debating whether to go into police work or sports media. It'd be interesting if you kept us posted about Pecadillo's progress every now and then. If you do so, I'll pass the comments along to our son.

Thanks for the mention and for the encouragement. Yes, I plan to make a weekly go of it. I have found myself so absorbed with my own writings, that I haven't been introducing my readers to others - which was one of the reasons I began blogging to begin with. Thanks again.

That comment about wondering if you'd forgotten all your mama ever taught was MY comment. The name Karen was attached to the other comment above it. -:)

It's so seldom I say anything noteworthy; I have to take those opportunities when they arise.

And it was also meant for Internet Monk.

Kim, I'm sorry about that.

Marla's software puts a long line before each signature in the comments. That creates the appearance of a box that pairs the previous commenter's name with the subsequent post. I misread those things all the time. You'd think I would learn. I've fixed it now.

My apologies also to Karen, who, as it turns out, did not insult me.

That picture of the homeschool mom is priceless! I can just imagine you doubled over chortling over THAT one.

Apparently no matter how often I link Mr. Johnson on my blog I will NEVER be blogspotted.

Pecadillo is going to the Police Academy?! After reading his blog and seeing some of the pictures, they might want to consider giving him the lead role in another Police Academy movie! What number are they up to now in those films 5 or 6?

Better late than never :D ...thanks!


(Btw, Candleman told me you fell prey to curiousity. Yup, I meme. And I tagged his wife. . . I'm glad I could play some small part in getting you to participate in this one.)

The tax cutting that Bush and Reagan have achieved is now seen as a long term way of achieving such a goal.

That's my 23/5. The problem is that it is part of an entire article that is against such things...

How did you get that picture of me in the AM before coffee?! Yikes - I thought a woman's kitchen was her castle!

what do I have to get pyrospotted??! for darn sake.

Phil must fear the wit and cutting edge of my progressive discussion.

The Swamphopper arrives a week late to the Sprugeon-Johnson look alike party:

I love the cute photo tribute to homeschool moms. :) (Or should that now be Homeschool Moms?)

Tying up a few loose ends:

Carla: I was trying to be nice by labeling your conniption a "whine."

Ajlin: Sorry I missed you. Your post on Alferd Packer was definitely worth a blogspot. Apparently I didn't go deeply enough into my Technorati results for it to come up. Congrats on your marriage, BTW.

TulipGirl: Thanks for the memerys. Since you're so delighted with yourself about it, I wish I could get some kind of revenge, but that would require me to pick up a meme and pass it on. I'm so not into memeing that I don't even participate in the wave at sporting events.

OSO: It kills me how Aussies and Europeans all think they understand American politics better than Americans do—especially when it comes to disposing of American taxpayer money. I think you should post some of your political perspectives in the comments over at Triablogue. May I suggest starting with one of your anti-Bush, anti-war screeds? You'll get some thoughtful analysis from those guys, I promise.

Rev. James Jackson: Almost nothing you could ever do could entice me to blogspot you. But I'll tell you what: Tag TulipGirl with 15-20 really annoying memes before the end of November and I'll think about BlogSpotting you.

Marc: Dude, I missed you in the blogspotting, too. How'd that happen? BTW, "Purgatorio" is sheer genius. I'm seriously considering giving it a place in my "Stellar" category.

It's far too under-used in our day.

Phil, have you been talking to my mom? She used to say I could throw "the perfect conniption fit"... I'm fairly certain she had me confused with my sister, however.

Thanks, Pyromaniac!
You da man!

If I knew what a meme was, your wish would be my command.

Please, I'm honored at the thought of being moved into the Stellar category, but I prefer to keep praise and accolades behind the scenes...

BTW Do you mind if I use the sheer genius quote in my "what others are saying" section?

Thanks for the free publicity for my book...I think. :) Barbara Coyle

Barbara: Yes, that's absolutely a recommendation for your book. I got it from a friend in the Seattle area. It's good stuff, and I recommend it to all Homeschool Moms.