The Banner of Truth arrived in the mail today 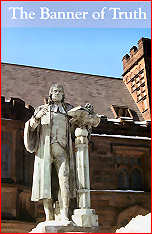 I've always loved The Banner of Truth. The November issue is especially good. Just thumbing through, I noticed a brilliant article by Tom Lyon, "The Centrality of Preaching." Lyon includes an undocumented quotation from John MacArthur:

Worship services in many churches today are like a merry-go-round. You drop a token in the collection box; it's good for a ride. There's music and lots of motion up and down. The ride is carefully timed and seldom varies in length. Lots of good feelings are generated, and it is the one ride you can be sure will never be the least bit threatening or challenging. But though you spend the whole time feeling as if you're moving forward, you get off exactly where you got on.

I recognized the quotation as something I once edited, but I had to do a little searching to find it. Turns out it's from Our Sufficiency in Christ (Dallas: Word, 1991), pp. 150-51.

The "News & Comment" section of this issue includes something that made me smile. It's a scolding from "Lady Catherwood of Cambridge," who wrote to express her displeasure over a remark reported in a previous issue's account of the U.S. Ministers' conference. It seems someone had suggested that the use of PowerPoint presentations is a good way to build a congregation of women. ("Men and boys do not hear unless you are looking them in the eye....")

Precisely who originally made the remark isn't quite clear, but I figure it had to be some American. I'm just glad it wasn't me.

What's not mentioned is the fact (well known to regular Banner readers) that Lady Catherwood is Dr. Lloyd-Jones's daughter. She has also been the main editor of Lloyd-Jones's printed works for many years. I've served with her on the board of The Martyn Lloyd-Jones Recordings Trust for about twelve years and have the utmost respect and affection for her. Both her depth of theological understanding and her editorial accomplishments make her a particular hero of mine. Getting a scolding from her would cause me more pain that a twenty-minute clubbing from ten homeschool moms using unabridged dictionaries. But it was fun to watch, as long as someone else was on the receiving end of her reprimand.

Also in "News & Comment" is an editorial response to "a number of readers" who have written to express displeasure that there is so much controversy in Christendom. The editorial is a brief, patient, thoughtful, and well-worded defense of the need to defend sound doctrine. The Banner has always excelled at defending the truth with power and conviction but without rancor.

Therefore, in a post-Christian world and in an often post-Christian church it is imperative to point out with love where apostasy lies. We must openly discuss with all who will listen, treating all men as fellow men, but we must call apostasy, apostasy. If we do not do that, we are not ready for reformation, revival, and a revolutionary church in the power of the Holy Spirit. We are all too easily infilitrated with relativism and synthesis in our own day. We tend to lack antithesis.
Francis Schaeffer

The keywords in this fairly lengthy quote are "love" and "antithesis." Love should be at the root of any legitimate Christian controversy but alas, it often gets lost once the dialogue takes off in pursuit of antithesis. Love need not be antithetical to controversy if we are walking in the Spirit.

Loved your comment, "Getting a scolding from her would cause me more pain that a twenty-minute clubbing from ten homeschool moms using unabridged dictionaries." Very picturesque language.

As for Banner of Truth being shoddy enough to publish an undocumented quote...shame on them. Their editor deserves a twenty-minute clubbing from homeschool moms wielding The Chicago Manual of Style.

I have loved the books put out by Banner of Truth, but didn't realize they had a magazine. Thanks for this glimpse into the world that swirls around the legacy of Dr. Lloyd-Jones and the still vibrant work of faith among these far-away Christians.

Actually the comment about power point and men was said by a welshman (Stuart Olyott)...he said many such things at the conference and was a great speaker. Didn't always agree with him on the practical stuff, but his theology is awesome. I aways enjoy the BoT minister's conference...have been going regularly since seminary! But even though this time it was one of "theirs" that said the astonishing thing...we ugly Americans give more than our fair share of crazy statements. Somehow they keep invinting us back (for which I am thankful).

Yet another homeschool mom joke. Methinks you have an obsession with them hehe...

Getting a scolding from her would cause me more pain that a twenty-minute clubbing from ten homeschool moms using unabridged dictionaries. But it was fun to watch, as long as someone else was on the receiving end of her reprimand.

Phil, if I had a writing student at my house that could reproduce something like this, I'd put down my club....but not my dictionary.

GREAT STUFF PHIL,,,,,I am a member at a church that has of late,,,seemed to have purchased one of these merry go round's and I feel like I am somewhat of an amusement ride operator being that I am a soundman...and I am very concerned about it.....please pray for me as I am also praying for discernment and hope that we decide to sell this ride to the Scrap Yard!!

I was glad Lady Catherwood took ole Stuart to the woodshed. In the 10 years I have been attending the Banner Conference, his lectures were some of the worst. He came off as arrogant and snippy, and his content was marked by vapid generalizations.

Did you see that they are releasing Issues 1 - 16 clothbound and are considering releasing more if there is enough interest?

These would make great additions to anyone's library.

Phil, do you have a graphic/comic to go with that verbal imagery?

Homeschool mommas would doubtless abuse you over the improper gender declension!

Youy're my heroin. I mean "heroine". Excuse me.

"Getting a scolding from her would cause me more pain that a twenty-minute clubbing from ten homeschool moms using unabridged dictionaries."

Phil, you seem to be forgetting all of us homeschool dad who would more than likely take up the unabridged Calvin's Institutes to club you.

Pardon me, that should be homeschool "dads."