Thanks for your patience 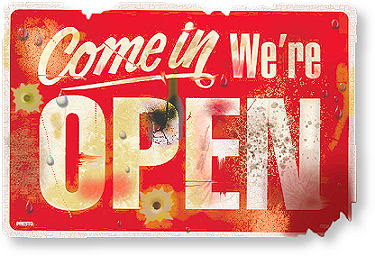 Sorry for the long delay. I noticed there was some speculation about what my long absence signified. Actually, I wasn't intentionally being mysterious. I mentioned in my last post that I had a deadline to meet. I was editing a book manuscript whose due-date was impending, and with all the hoo-hah the pacifism issue was stirring up here, I couldn't write blogposts, participate in the discussion, and still finish the book on schedule. Something had to give.

My plan was to finish the book and take a few days to get the blogplan in order, have a few spectacular posts in the can and ready to go, then relaunch in a big way tomorrow.

Unfortunately, a couple of minor crises arose during the past two weeks (nothing too serious, but very time consuming) so the book took a little longer than I projected anyway. I just mailed it off last night, and I have nothing written for the blog.

So for those of you who have been awaiting something really special, I'm sorry to disappoint you.

Many have noticed that during small breaks while editing over the past two weeks, I messed around a little bit with the graphics here at PyroManiac. I started by posting a picture as a birthday greeting to my esteemed sidekick, Pecadillo—and then I just couldn't leave well enough alone. It wasn't a calculated experiment to mess with people's minds (though I enjoyed that aspect of it immensely). I was a little disappointed, however, that no one seemed to notice when a pterodactyl flew through the image.

I do want to say a heartfelt thanks for all the comments. I think we finally have a post that generated more feedback than the Great Comic Book Apocalypse of September 1.

This is where I am right now...

Anyway, I finished the book yesterday and am now able to get back to a more normal routine.

...except that we have a major board meeting scheduled here at Grace to You on Monday, and I have to speak twice on Sunday. So when I say "routine," I mean that in the sense of "routinely hectic."

I've done little housekeeping on the blog template this morning, updating the "favorite posts" lists in the right sidebar. Enjoy a little romp down memory lane if you care to.

I also designed a new logo during lunch-breaks whilst editing. It replaces the image on the matchbox at the top of the right sidebar. I'm ordering vinyl stickers with the logo in large format, so that I can offer it to my friends as a bumper sticker.

But don't look for major or substantive posts till after the board meeting Monday. I'm just reporting in, and I'll keep posting, perhaps doing some BlogSpotting this weekend. I also have some plans for a couple of significant changes in the blog, which I'll announce tomorrow or the next day.

Meanwhile, I again apologize for not returning with a splash as anticipated. However,

Another Biblezine parody for the collection: 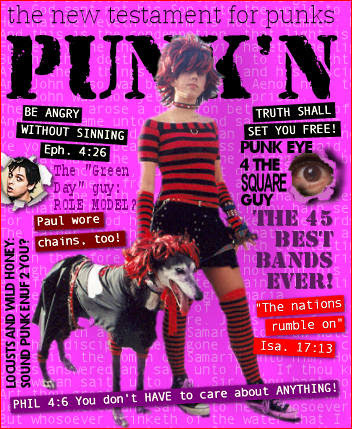 No, this is not a parody, but the latest actual BiblezineTM release from Thomas Nelson: 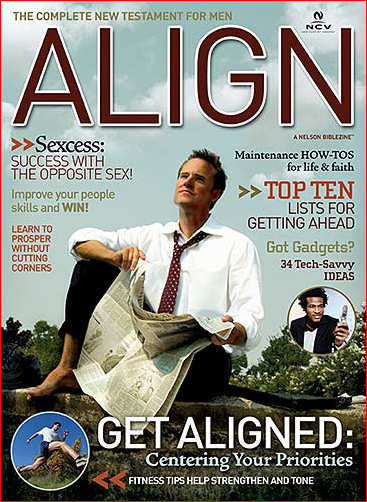 Your back, I'm happy, the world makes sense again.

Actually, habitans in sicco noticed (don't know which post number it was, though):

"The picture has changed every day. Yesterday there was a pterodactyl flying by."

Glad you posted a link to the pic, I was sorry I missed it. Although if you had posted a picture of a schmerodactyl, that would have been even more cooler.

Why do I have the urge to sing the Welcome Back (Kotter) theme song?

You need to shave your back. Look's like one of the Henry's was turned loose on you.

Is the Biblezine for Men for real? The line "Centering your priorities" sounds like the standard New Age Lingo.

JRod: Yes, sadly, it's real. What strrikes me is how blatantly they appeal to the lust of the flesh, the lust of the eyes, and the pride of life in the name of "relevance."

Makes you wonder: Is there no one in the planning meetings for these things who has a modicum of discernment and is willing to raise the question of how far is too far in making the Bible seem tawdry and shallow?

It's getting hard to parody this stuff. The real thing often exceeds the parody.

Yup, Kerry. I was just waiting until you got it together.

That is one square-jawed man on the 'biblezine'.

It's good to have you back Phil.

Is this Phil saying, "Rumours of my death are greatly exaggerated?"

V-Word: urgfxqbq - "What a baby says after making a mess in his/her pants"

I want to know ow you got Jack Russell to dress like a girl for that parody cover.

And I can't believe your first post after hiatus breaks the cardinal rule of blogging.

You're a cad. A completely solipsistic cad.

You put up one sub-par new post in almost 2 weeks, and the day your self-referential blather hits the band width, 89 of my last 100 hits are from your blog.

Moorhead was right. You're a cult of personality. You're like the internet theology geek version of Don Juan or something like thank.

I'm completely spent writing, btw. Trying to keep up with Doug Wilson has been like taking a joy ride with Lance Armstrong one random saturday.

Cent, you appear stressed. Take a ten day blog hiatus like Phil did.

What can I say? I learned from the best.

Phil,
I, of cousrse, noticed and appreciated the pterodactyl. Hence my comment "I guess candinsierras young earth pteradactyl theory is true because, apparently, they are still with us today.
"

So don't feel bad. In fact, I was guessing you might toss something up there and was watching for it.

Centurion: Whilst you're imprinting Bibles, I wonder: Does your store carry the Biblezines? And if so, do you have one for fans of professional wrestling? I'm late getting Pecadillo's b'day present, and a New Testament with the Dudley Boys on the cover might be just the thing.

Actually, I wasn't intentionally being mysterious.

hmmm...did anyone else notice phil using the word "Whilst"? just slipped it right in there, right in the middle. adrian will be so pleased.

Welcome back. I am most relieved.

Whilst X 2; once in his comment and once in his return post...he's on fire with verbal savvy whilst finishing major deadlines! Is there anything he can't do?

and i thought the zines were parody!
Oh the floodgates have opened, I see it all now.

The only WWE Biblezine we have left is the Divas edition, and we keep those behind the counter in brown paper to keep the KJV Old ladies from having vapors.

Glad you are back! Great new logo, by the way.

This isn't like Michael Jordan's comeback now is it? Are you wearing number 45???

Big Chris
Because I said do blog
http://mrclm.blogspot.com

A Christian bookstore in our area recently went out of business, and sold off all their remaining stock at wholesale cost.

Of the few books still in stock, most had only one copy left. The ONLY item in the store with lots of copies yet unsold were the new Biblezines. It appeared that no one was interested in them. It would have been nice if the unsold stock could have been shipped to a paper recycler so it could come back in its "next life" as something more respectable and God-honoring.

Good to see you back--was the picture to the Men's Biblezine taken down?

Pilgrim: No, it's still there. Hit reload, or right-click on the red x and choose "show picture." Sometimes, depending on how you're connected, an image will time out when you first load the page.

As you can see we made a schmeradactylian effort to keep your blog going in your absence. The rest of us will talk to you later about remuneration for our hard work doing so.

BTW, many moons ago you said you would put something together about the Ezzos. Are you still planning that?

Yikes! What was that? Is it a plane? Is it Superman?

No, it is Schmeradactyl Man!

I was kind of hoping that Phil was doing some research on the new textual theory that has been suggested. Namely that there is an oral tradition behind Q which the textual critics are calling Pt, for Pteradactyls. It was recently discovered that there is a secret code in some of the "Synoptyc" Gospels. For example, it has long been postulated that the real reason behind the 12 baskets of fragments left over from the feeding of the five thousand was because there are actually 12 letters in the word Pteradactyls. Any thoughts, Phil?

The term is "Punkster." The punk rockers I knew back in the day did not like to be called "punks."

ps verification word is "mzyll," which is Snoop Dog's nickname for Meryll Streep.

It is nice to have you back on the web, Phil!

My personal favorite of the "men's magazine" is the name itself - Align - shouldn't they really just spell it out "A Line?" They come up with enough of them.

"Sexcess with the opposite sex?" Not likely.

I actually took Phil at his word and didn't bother to read-and here I find 215 comments! You guys need lives!

Though having said that, maybe I do too..I read all those comments last night-hee hilarious in a pathetic sort of way. Thanks for the laugh, everyone. Now, get some help!!