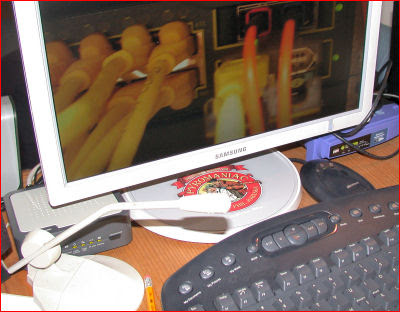 Here's something a lot of visitors to my websites may find hard to believe: for the past five-plus years, virtually all my home computing has been done via a 28.8k dial-up connection. (With occasional forays to Starbucks or Panera Bread to use the high-speed wireless networks there.)

Shortly after I started The Spurgeon Archive in 1995, I upgraded to a 56K modem, and it seemed really fast at the time. When we moved into the new hovel at the end of 1999, I intended to upgrade to DSL, but after moving in, I discovered we were just outside the area where DSL is offered.

Worse, I soon discovered that the phone line here is so bad, I couldn't connect any faster than 28.8, and I lost the connection every half hour or so.

No problem, the phone company assured me. The whole city will be wired for DSL within six months.

Yeah, right. Five years and three laptops later, I still can't connect any faster than 28.8, and I finally got fed up.

So two days after Christmas, I went to Best Buy and purchased a new HP desktop computer. I also bought a wireless router and ordered cable broadband service from Earthlink.

I spent the week after Christmas installing software and setting up the computer. (See part 1 of this post for an explanation of why that's no small task. That partly explains the lack of blog activity last week.)

Today the cable guy came and hooked up my broadband. After he left, I spent the afternoon setting up the wireless router and home network (something I was totally inexperienced at). But it's all working flawlessly now.

Yep - you don't think it is a big deal until you have it, and then the difference is amazing! We were 26.5K for years through our phone lines until we finally went to DSL a few months ago. I cannot imagine blogging without it.

You doing it on poor dial up with your graphics and all is actually mind numbing.....

So can we expect more from the Pyro now that he is HIGH SPEED? Talk about burning up the blogosphere!!

Cool!. I upgraded to ADSL in April last year after being on 33.3k since 1996. Great for all those 20Mb+ gracelife sermons.

Wow. Welcome to the 21st century!

Okay Phil, I am officially, insanely jealous. We had high speed cable until 4 years ago when we moved to the country.

Open spaces, fresh air, privacy - all that good country livin' stuff. And dialup access only... at a whopping 31.2 kbps.

"Don't worry, that area is scheduled to be set up for high speed access in 3 months!" The cable lady said. Four years later, I'm still plugging away at 31.2 clicks.

Oh well... it must be a test in patience? At any rate, I'm very happy for you, and your broadbandedness. May you whip through those things in record time, which last week took what now seems like, forever.

If you're wondering where that frustrated holler came from that sounded like "oh MAN I hate dialup!" that came from Ontario. It's a weekly thing, at least.

should have went with Apple...those iMac G5s are a thing of beauty.

Ddi you have a sense of the Holy Spirit's guidance as you connetcted the router?
Did He nudge you to stick this wire there, and this other one another place?

Dr. Adrian Rogers was right. The only thing we've added to technology in the last 20 years is speed and noise. But ain't it nice!

Evenyone else is an amateur. My fondest memories of Broadband/Internet service are with Earthlink, which in my experience is the most reliable service you can find. You have just joined forces with the top-shelf internet provider on the planet.

It's like having the whole world in your own home.

You already know this, but I'll remind you (and perhaps others) anyhow. Make sure your network is secure. Read and understand and apply the tips from this article. My son bought an iMac a few months ago, and he gets wireless access from a neighbor's house (or perhaps a nearby restaurant).

You'vetaken your first step into a much faster world.
You can never go back now!

Carla,
Centuri0ns right about Earthlink in my opinion, but have you considered satelite internet?

It is just fine for everything but online gaming.

Does your son know that leeching web services from someone else is illegal? Just a heads up in case you didn't know (in all seriousness).

I think I would avoid moving to the country or anywhere if it meant that I wouldn't have highspeed service. :D

I hooked up with EarthLink via Time Warner two years ago, and have found the service very reliable. You will not be disappointed!

What technology does broadband earthlink use if it isn't cable, DSL, or satellite?

Also doesn't Starbucks charge something like $30 a month to use their wireless or did they finally go for free?

You must be a very patient person.

So when you were going to start talking about ceassationism, I thought you meant spiritual gifts, not old technology.

Phil, I would augment the article that Jim linked to only in this way, on point #7 "Position the Router or Access Point Safely" - the best place to position the wireless lan (router) if you can physically pull it off, is in your cellar (if you have one).

The signal is still quite strong in the house (er, and above it for that matter), but much weaker outside your house since the signal is hindered somewhat by your house's foundation.

Yep. should've gotten a Mac. You'd have been set up and on the web and had everything up and running in much less time.... and the Mac's OS is much more secure than WinXP even before the router's firewall.

I like DSL, though - even though the connection itself is unsecured (Verizon gives you a combo router/broadband modem), you still need a Verizon DSL account to log in and connect.

It's interesting how many people leave their networks unsecured.

I guess I should be happy with my 600kbps. We are actually going to go to insight which would be cheaper and about 6-8 times faster. How could you survive on dial-up?

Hey! Another Centurion! Except this one's reformed!
:-)

Yesterday, I announced to all that I had been scammed by Steve Camp. Since then, Steve has taken care of the situation in a very gracious, humble manner. I apologize to Steve publicly for sharing what he believes is a private matter in such a forum. Sir Phil, please forgive me for using your comment area for this purpose.

Once you get wireless and broadband, you will hate dialup if you are ever forced to use it again.

Welcome to the future!

I hope your experience with Earthlink is better than mine was. When I had dial-up, they were OK for a while then seemed to go to pot right about the time they acquired Mindspring. I got fed up with them and dropped them like a bad habit.

DslExtreme is my provider now, and they are great. Their charge for new customers for DSL is $14.95 a month for the first year.

I actually blog through my 2 Tin Cans and a String connection. It never drops but loading my blog takes about 4 days.

The downside is you will smoke your virtual cigars faster.

The really cool part was sending files wirelessly from the laptop to the networked printer, from downstairs, while my wife was upstairs on the desktop and wondered how the printer started up...

Welcome out of the age of rotary phones and having to walk to your TV to change a channel;)

Don't make me clown you.

I actually blog by dictating my entries to a bird which types the message onto stone tablets and then flies them to BLOGGER HQ in L.A. Then Wilma Flintstone removes the stone tablet that is in front of a stone-age TV camera which broadcasts my blog with the new tablet. It takes about a month, but watching the process is worth it, and Wilma's giggle keeps me enchanted when I find myself getting impatient.

Isn't testosterone an amazing thing? Now we have men challenging each other about how stone age they can be..

How deliciously unreconstructed of you :)

Why do I feel like I just stumbled into a Monty Python skit? LOL

Let's see...I compose my blog in heiroglyphics (sp?) on the wall of a cave, then fill in the cave with mud and stones and wait for a team of archaologists (sp again?) to discover the cave, dig down into it, translate the pictures into text, and then publish doctoral dissertations containing the findings in a trade journal.

Eventually, the journal gets picked up by Google, someone finds the article and blogs about it, thus finally making my thoughts accessible to the blogging community.

Welcome to the superhighway, Phil!

Kyiv does have high speed internet--but like you, we found ourselves just outside the limited area where it was offered.

I think Steve may have you beat on this one. If not in archeology, then in doctoral dissertations. :)

You will need to guard your time most judiciously now; much more content to kill time with...

Wow. Of all the people in the world, I would have pegged you as one of the last to have sat back in the stoneage and watched the www whiz by you at about the same speed as paint dries and snails crawl. Congrats, and it's about time.